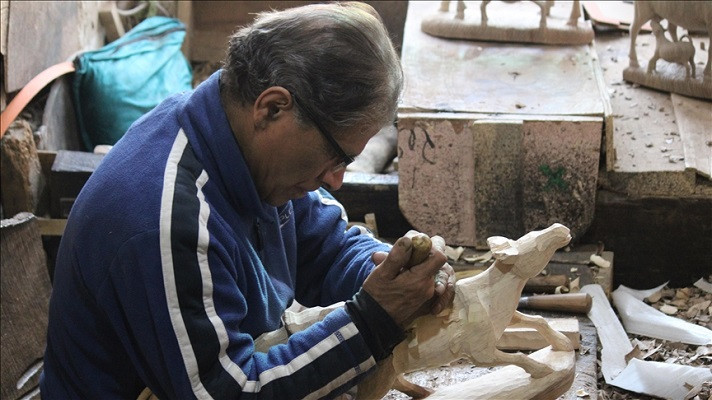 In the narrow lanes of Srinagar, capital of the Indian Illegally Occupied Jammu & Kashmir (IIOJK), Mohammad Yusuf Muran, a deaf and mute walnut woodcarver, is busy crafting a sculpture of a lion and a stag in his 200-year-old workshop that has housed the finest craftsmen over many generations.

Upon entering the workshop, one finds Muran, 55, carving and giving shape to the wood.

Using sign language and with a gentle smile on his face, he communicates with visitors, who cannot help but marvel at the fine pieces of art that he has completed.

His son Saqlain Ahmad, who also acts as his interlocutor, said his father is busy in his workshop from dawn to dusk, carving beautiful sculptures and miniature replicas of historical monuments out of walnut wood.

Experts believe that this walnut woodcraft is one of the oldest crafts originating from Central Asia. Muran is the last man that has mastery of the art despite being born with speech and hearing impairments. From utility items to sculptures, Muran’s art seems so real and breathtaking.

Before the independence of India and Pakistan in 1947, Ahmed said that their family was selling crafts in Karachi. In the early 20th century, the family set up the craft unit in Srinagar as well.

Muran shows the tools his father was using to carve out decorative items from the wood.

Using sign language, as interpreted by his son, Muran said they are not just tools but “dignified tools of labor for an artist.”

Apart from wall hangings and utility items, he also uses his skillful hands to make sculptures of animals such as elephants, bulls, bears, stags and cows.

Famous personalities are also among his repertoire, and there are many such sculptures on his shelves, like that of Mahatma Gandhi, Saint George slaying a dragon, and former Iraqi President Saddam Hussein.

But Muran is very much proud of a six-foot houseboat he has made a few years ago, and a miniature of the central mosque of the city, Jamia Masjid, that he made for Mirwaiz Umar Farooq, the separatist leader, who also manages the affairs of the city’s main mosque.

“He makes things just by looking at them, he is very confident and sound in that way that connects him with them very well,” said Ahmad.

He said that art was not easy. It comes with varying costs.

“My father’s eyesight has been affected and he has continuous pain in his joints,” he said.

Muran also shows his rough hands, which have many cuts due to continuous chiseling.

He laments that despite getting appreciation from many quarters and bringing Srinagar to the list of UNESCO-recognized creative cities, the artists like him remain underpaid and without gratitude.